Community plays an important role in all our school communities.  Part of community is building relationships between students at various grade levels. Nowhere is this more evident than HSA McKinley Park. Ms. Folk, 5th grade Social Studies and English teacher, worked with her students to study more than nine different Holiday traditions from around the world.  After their studies they worked to write a script and determine ways to present the information they learned to others. Concept English was invited to join her students as they organized a variety of items, foods, and other artifacts from the various cultures they studied and then present them to an audience made up of K-4th grade students from their school. 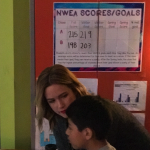 Students reported to Ms. Folk’s class and were treated an overview of their trip and then asked to accompany a student pilot and co-pilot as they guided travel around the world (halls and stations) to learn about each holiday.  Depending on the students’ ages they were asked to report what they learned in either a Passport of Holiday World Travels or a Suitcase where they placed artifacts like flags, or cards that said Merry Christmas in Japanese, and I learned how to make cool candles out of paper strips.

I think we all wished we were in Australia where they sing “Let It Snow” but change the words to reflect the sun and surf. Lucky for us all that Black Pete was not traveling with St. Nicholas and threatening to carry off those of us who had been bad in his bag.

Concept English was so impressed.  Ms. Folk and the teachers did an outstanding job coordinating this event.  Not only were the students well behaved, they were actively engaged in learning from each other and about cultures that were similar and very different from their own.

Feel free to check out the script and passport. 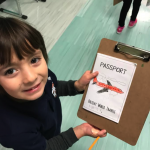 Enjoy our photo gallery as well.